Glitch Techs Wiki
Register
Don't have an account?
Sign In
Advertisement
in: Shows, A to Z, G

Hinobi is a huge gaming and tech company that makes massively popular video games and consoles. What Hinobi customers do NOT know is that whenever one of their games has a glitch, the creatures from the game are released into the real world! That’s when the company sends the Glitch Techs: a trained support team equipped with an arsenal of fantastic gaming gear designed to capture video game pests and put them back where they belong! Once a glitch is returned, the Techs must remove any evidence it was there – including the memories of any witnesses! Not only do Glitch Techs fight for the safety of the city, but they also work at Hinobi stores, helping customers with tech support and service needs. Enter Miko and High Five – new recruits who fight glitches and reformat witnesses all before the store closes at 5 pm. Talk about a crazy job!

Glitch Techs started production in 2016. In early 2019, Nickelodeon froze production of the episodes after the 20 in post production, and laid off several of the team members for reasons unknown. It was picked up by Netflix as part of a multi-year deal between Nickelodeon and Netflix, and it premiered on February 21, 2020. 20 episodes have been released so far across 2 seasons. As of now, no word has been given by Nickelodeon or Netflix over whether or not Glitch Techs will continue production. This leads to some fans assuming the show has been silently cancelled. 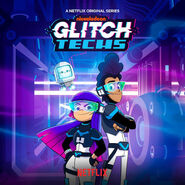