Back to page
View source

She is the voice of Simi and Emma Deveraux in Glitch Techs.

Day was born in Huntsville, Alabama. She began her acting career at the age of 7 when she starred as Scout in a local production of To Kill a Mockingbird. She studied operatic singing and ballet professionally, performing at concerts and competitions nationwide. Home-schooled throughout much of her childhood, she began college at the age of 16. She was a National Merit Scholar and graduated as valedictorian of her class. An accomplished violinist, Day was accepted to the Juilliard School of Music but chose to attend the University of Texas at Austin on a full scholarship in violin performance. She double majored in mathematics and music performance, and graduated at the age of 19 in the top 4% of her class. She is also an avid player of a wide variety of video game genres. Much of her work on The Guild web series was based on her personal experience with video games, especially when she played World of Warcraft. 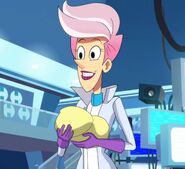